History of Idlewylde & the ICA 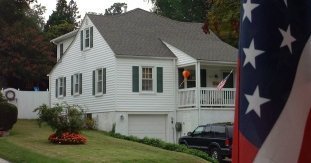 Idlewylde is a Baltimore County community of more than 700 homes, ranging from 1920s bungalows and small Cape Cods to brick colonials and Frank Lloyd Wright-inspired designs, situated on the Chinquapin Run and Herring Run-B subsheds. It stands mainly on Beulah, the one-time estate of Joshua Regester (1816-1906), a Baltimore brassfounder of Welsh descent whose bells graced the Naval Academy in Annapolis, St. Dominic’s Cathedral in Washington, D.C., and Baltimore City Hall. Beulah (not “Beulah Land,” as sometimes said) extended north to Stevenson’s Woods (now the Country Club of Maryland golf course), south almost to today’s City-County line, and west to the Birckhead estate (“Anneslie”) and the Brown estate (“Stoneleigh”). On the east it extended to the Towson tributary of Herring Run, and on the north-east it reached across the stream to embrace most of today’s Glendale.

The family’s summer home, now 6508 Crestwood Road, was built in 1853. It is the oldest building standing in south Towson and, although sadly altered by fire, is listed by the Maryland Historical Trust. The street now known as Regester Avenue originated as the route from York Road to Beulah and was continued through the property when it was developed.

The final years of Beulah are a bit of a mystery. A puzzling Baltimore Sun report of October 29, 1900, reports that “the J. Regester’s Sons Company” has conveyed the estate, which it says “formerly belonged to the late Joshua Regester,” to Joshua’s five sons – but Joshua in fact lived until 1906. By 1910 it was consolidated in the hands of one son, Daniel, and his wife, who must have defaulted on the mortgage, since it was put up for auction by the mortgagee. The auctioneer’s ad specifies a lot of 237 acres “improved by a MANSION HOUSE, two Tenant Houses, all frame: Large Barn, several barracks, Carriage House and Stable, two Dairies and other outbuildings.” Excluded from the sale, although mentioned in the ad, is the plot conveyed by Joshua Regester in 1881 to the trustees of the Beulah Methodist Protestant Colored Church. The church appears in the 1898 and 1915 Bromley atlases of Baltimore County.

By 1913, Beulah belonged to Idlewylde Realty Co., one of several companies owned by Baltimore real estate promoter Harry Gilbert and his family (this one may have been set up specifically to develop the estate). The development plat registered in that year shows all the “improvements” listed in the 1910 ad. The plan was much more expansive than the Idlewylde we know: roads called Gainsborough and Athlone swept across the Herring Run into that northeasterly corner of the Regester estate known today as Glendale. Note the “Center Line of New Electric Railroad” running along the line of the Herring Run tributary. The railroad was never built, but the prospect may help to explain why Beulah was developed ahead of the estates between it and York Road.

By 1915, that year’s County Atlas shows a few homes appearing, mainly near the intersection of Regester and Sherwood. Two years later they were joined by the Idlewylde United Methodist Church, today the oldest church in south Towson and listed on the National Register of Historic Places. A feature of these early years was the electric shuttle “railway” that ran for about a mile along Regester Ave. from York Road to Sharon. According to Blanche Dorfler, who moved here about 1913 and whose family still live on Regester, it operated between 1916 and 1921. The reason it stopped running is unknown, but its disappearance coincided with the decision to develop the estates along Regester. Plats for both developments were registered in 1922. 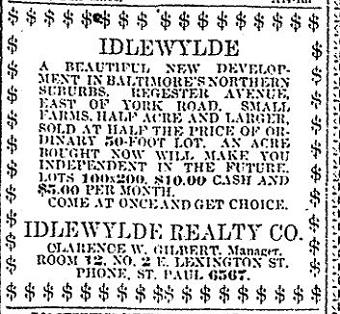 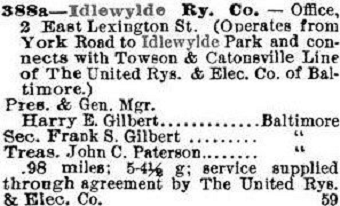 The vanishing of the proposed electric railroad along the Run, and the imminent development of Anneslie and Stoneleigh, went along with changes in the plan for Idlewylde. A blueprint from 1921 shows the acquisition of the eastern end of the Anneslie estate, adding Maplewood Ave and the west side of Banbury to Idlewylde. Another change, in 1921 or 1922, was the transfer of ownership from the Idlewylde Realty Co. to Cityco Realty, also a Gilbert company. The yellow lines drawn on the blueprint, separating sold and unsold lots, may have been plotted to facilitate the transfer.

The 1924 Cityco plat of southern Idlewylde registers another important change: a further land purchase between the Anneslie annex and Walker Ave., where residential development on what is now the 700 block had begun before 1900. This acquisition permitted the addition of what today is the 6300 block of Banbury, opening a southern route from Idlewylde to York Road and giving the Walker Ave. homes easy access to the stores that began opening on the 6300 block of Sherwood Rd. To this day, residents of the County part of Walker west of Banbury Rd, squeezed between Anneslie and the City-County line drawn in 1918, are invited to join the ICA.

The 1924 plat is a snapshot of the progress of the development. The lots marked on the plat are those that have not yet been sold. Naturally, they cluster at the southeast quadrant, furthest from the Sherwood-Regester intersection, and in the newly acquired southwest corner. The southwest corner was mostly sold off and built on by the end of the decade. Except for Wakeford (soon to become Overbrook) between Beechwood and Arran, most of the southeast quadrant remained undeveloped until the 1940s and 1950s.

But the 1924 plat doesn’t just offer a snapshot of the development at that time: it captures a moment of thought about Idlewylde. Wakeford Road, which originally ended at Sherwood, has been extended through the southwestern annex to Walker Ave. This imagines traffic flowing in and out of southern Idlewylde along the south side of Anneslie. But within a year, the extension of Overbrook Rd to Idlewylde (not provided in the original 1922 Anneslie plat) has opened up a new outlet to York Road and Wakeford has been renamed in a way that diminishes the Walker Ave. route.

Just as the plan of southern Idlewylde was adjusted to the advent of Anneslie, so that of northern Idlewylde was adjusted to the advent of Stoneleigh. For Cityco, this meant hiring Olmsted Brothers, the renowned urban landscape architects responsible for designing the City neighborhoods of Roland Park and Homeland, to design a streetscape that exploited the contours of Beulah’s ravines. Their design is in the custody of the Library of Congress, and there is a copy at the Baltimore City Archives.

However, the stock market crash of 1929 put an end to the dream, and two maps illustrate the reality. Sanborn’s fire insurance map shows the built-up extent of Idlewylde in 1929. In the revised Section B plat of 1938 the acres across Herring Run, fully platted in the Olmsted design, are empty; and where Olmsted Brothers had imagined curving parkways called Idlewylde Drive and Idlewylde Terrace, there’s space for a horticultural nursery and a cement plant. The northwest corner remained undeveloped until the 1950s, when the Maxalea Co. platted the area that today bears its name along with a distinctive identity and architecture.

The 1950s also brought growth to Idlewylde at its southern edge. The City-County line drawn in 1918 had left a fringe of the old John Work Garrett estate on the County side of it. When the estate was developed in the 1950s, residents north of the line were welcomed into the Idlewylde community. As with the homes on Walker Avenue, a bond formed between families whose kids were attending the same schools.

In particular, that meant Stoneleigh Public (now Elementary) School, built in 1929 to serve the area’s growing population. Blanche Dorfler’s son Roy, who was born in Idlewylde and lived here till his death in 2015, was a member of the first class. Like other members of those early classes, he found himself applying the skills he learned there, and in our local middle and high schools, to winning World War II. 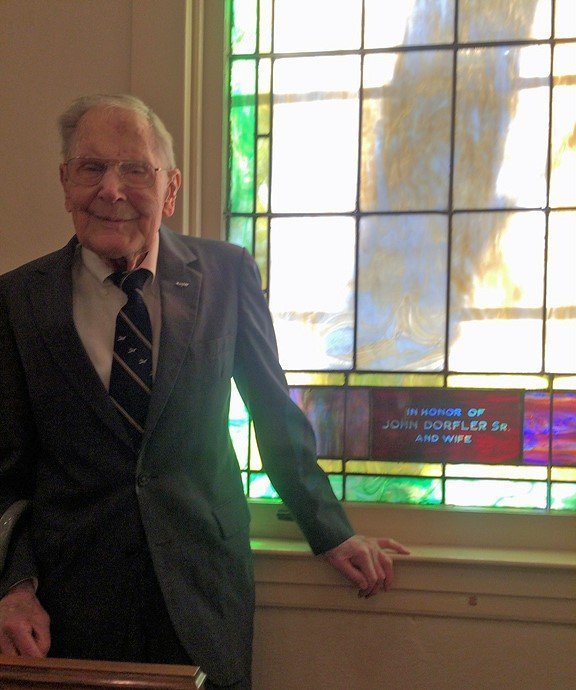 Roy Dorfler standing by the window in Idlewylde United Methodist Church that honors his parents.
John Dorfler helped build the church, which opened in 1917.

It was after the war that our Association, originally the Idlewylde Improvement Association, was founded in order to build a community hall. The timing is significant, since the venture powerfully expressed the solidarity and prosperity engendered by the conflict. John Janney’s letter preserves the founders’ names. The hall was completed in 1949 and has since served as a resource not just for Idlewylde but for neighboring communities too. 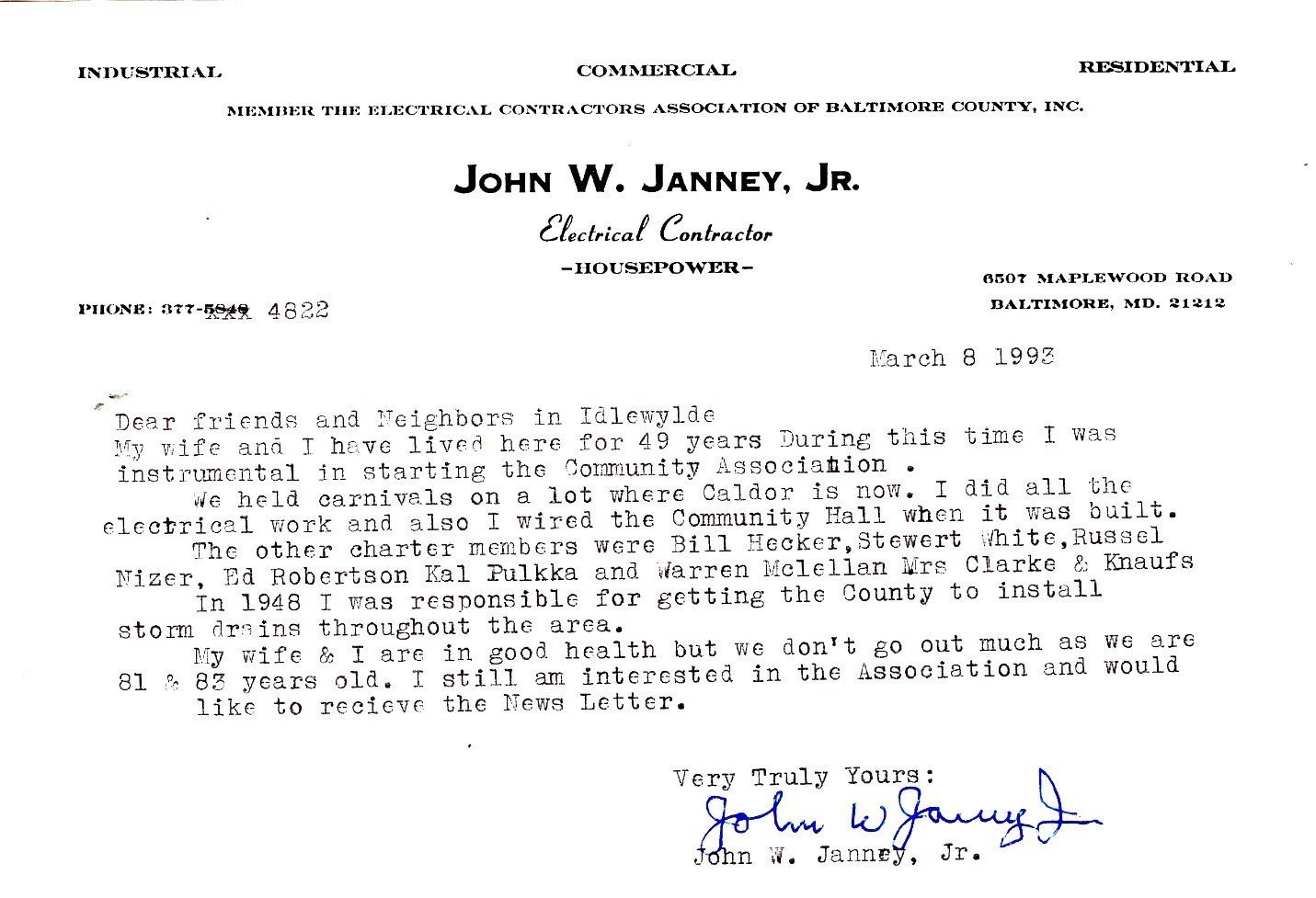 Since then, too, the ICA has continued to act as a focus of community energy for the preservation and improvement of Idlewylde. That energy has several achievements to its credit across the decades, sometimes in collaboration with neighboring communities and when necessary with the aid of legal counsel. They include blocking the northward extension of Sherwood Road to Joppa Road; the conversion of the Genstar site into Overlook Park instead of the propposed residential development; the compromise that established the Stoneleigh Summit development as an age-restricted community, thereby forestalling the threat to Stoneleigh Elementary School and the traffic burden on neighboring streets; and the creation of the “Idlewylde 21239” postal address.

Unfortunately, it proved impossible to extend the Idlewylde designation to our 21212 area because the Postal Service refused to divide the 700 blocks of Regester, Anneslie and Overbrook between different addresses. This can cause confusion: for instance, Nextdoor.com has assigned most of our 212 neighbors to Nextdoor Anneslie and a few of them to Glen Oaks. It does not explain why those who joined us in the 1950s from the Garrett estate, and who share the Idlewylde 21239 address, have been assigned to Idlewood.

This is only one way in which lines drawn by governments have affected Idlewylde. Perhaps the most obvious example is that produced by the City-County line. Another is the line, running along the middle of Regester Ave from York Rd to Herring Run, which separates electoral precincts 9-13 and 9-14. This usually is only noticed by northern Idlewyldeans who go to vote at Stoneleigh ES and find themselves wrongly directed to the 9-14 voting booths by monitors who think that all of Idlewylde is in that precinct, but it has sometimes given Idlewylde two representatives in the lower house of Congress.

Idlewylde is a pleasant and interesting place to live.